In Honor of our Veterans

At 91, CNY man who survived WWII gives back to today's veterans through art. 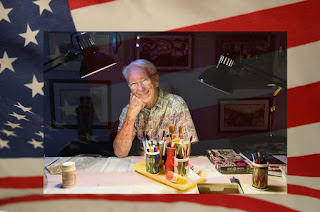 "From day to day you didn't know if you were ever going to survive, and it bothered me in years to come," said Adams, who now lives in Manlius.
After returning home, Adams said he struggled with depression and couldn't forget what he had seen. Years later, his depression, he believes, would have been diagnosed as post-traumatic stress disorder, an illness not officially recognized by doctors by that name until 1980.
"You see these things, they're indelibly in your brain and you can never get rid of it — you just have to deal with it," Adams said.
To cope with his illness, he turned to art, something he had loved since his mother introduced him to it when he was a boy.
"Art helped me readjust into civilian life again," he said.
Adams, 91, has never given up his love of art. He turned it into a teaching career for 34 years, most in Central New York schools.

Art still helps him deal with bouts of depression. And for the last seven years, he's volunteered to use art to help veterans who suffer from PTSD and other illnesses.

Popular posts from this blog